The Cochlear Implant of the Future Embarquerait LED and Fiber Optic

Yes, the fiber optic and LED lights are now mainly used in the fields of information technology and telecommunications. But miniaturization assisting, medical applications using these technologies are in the process of development. The cochlear implants of new generation, for example, could allow the hearing impaired to listen to the music and face a lively conversation in the noise of a restaurant. 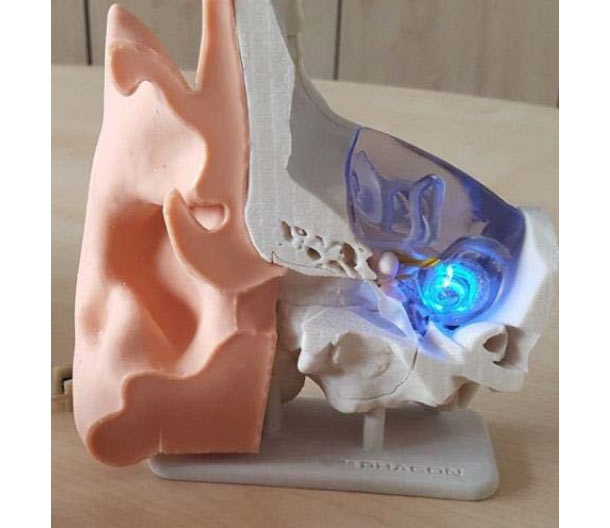 Model of the human ear with an implant optogenetics (Source: Gerhard Hoch, UMG)

Nearly 500,000 people worldwide suffer from severe hearing loss and use an electronic implant to enable them to understand what is being said to their interlocutor. And cochlear implants current, provide only a partial correction of the hearing loss.

Impossible for the time being to those who wear them to enjoy a Mozart symphony, or gossip in the din of a crowded bar. “If they go to the restaurant (the individuals equipped with this device), it is very difficult for them to understand the discussion,” explains Tobias Moser, a neuroscientist auditory of the University of Goettingen in Germany at Scientific American. “They also suffer from not being able to appreciate the melodies.”

Optogenetics to the rescue

Why ? Because cochlear implants are equipped with up to 22 channels to receive frequency. The cochlea is a spiral structure located in the inner ear. It allows the analysis of sound frequencies. A membrane vibrates at different places in response to the various frequencies found in a sound signal is identified as the language. The vibrations then activate the cell “capillaries” neighbours who, in turn, stimulate the auditory neurons, sending frequency information to the auditory nerve to the brain.

Sensorineural hearing loss involves loss of hair cells and the establishment of cochlear implants to bypass the damage by stimulating the neurons directly with electrodes. But the current from the electrodes tend to disperse, causing an “interference” with any electrode adjacent placed too near. As a result, the devices are designed with a number of electrode limited in order to avoid interference. So to limit the number of frequencies that can be used by the system.

“The average performance with cochlear implants has capped over the last decade, so everybody’s looking for that next step,” explains the otologue Daniel Lee of the Harvard Medical School. “Optogenetics is a reasonable solution, because you can focus on the light and direct it in a way that you can’t do with electrical stimulation”.

Optogenetics is a research technique widely used to date in animal studies. It implies the introduction in the neurons of genes that have protein sensitive to light – the channelrhodopsins or “opsins” – allowing neurons to respond to light.

The researchers publishing this study had already published a paper in 2014 on the possibility to create mice that come with the opsins to the birth. For this new study, they used gerbils, who can hear frequencies lower than what humans perceive. The genetic manipulation has been carried out by researchers at of adult individuals. Specifically, they injected a virus into the cochlea of gerbils, the virus that carried the gene of the opsin in the auditory neurons.

A company to commercialize the solution quickly

They then used a fiber optic to transmit the light in the cochlea. With success it seems. The study has used a single channel optical and could not, therefore, measure the frequency resolution. An important step will therefore be the development of devices, multi-channel. In this perspective, the use of arrays of micro-LEDS could be considered, as guidance technology wave, which can direct light from optical fibers. Still, of course, problems of power and management of the size of the devices to adjust.

And also (yes, this is not a topic to be minimal), the question of genetic manipulation in human beings. The researchers, however, indicated that on a pure technical level, the genetic manipulation caused by a virus the ears, just like eyes, are good candidates for this type of experimentation because they are less protected by the immune system and simple to isolate an anatomical point of view. This ensures that the inserted gene remains in the targeted organ.

The researchers plan to begin trials on primates – who have immune systems more similar to humans – this year. “We’ll probably know in about two years if we feel comfortable enough to transcribe all of this in the form of a medical device,” explains Tobias Moser. “We still have a long way to go”. However, it provides as early as next January to start a business, named OptoGenTech, to commercialize this technology.

← Macbook: a GPU Externally Certified by Apple
Microsoft wants to show the leap seconds on Windows →